What a Day, What a Time We Had

by Trains Across the Sea 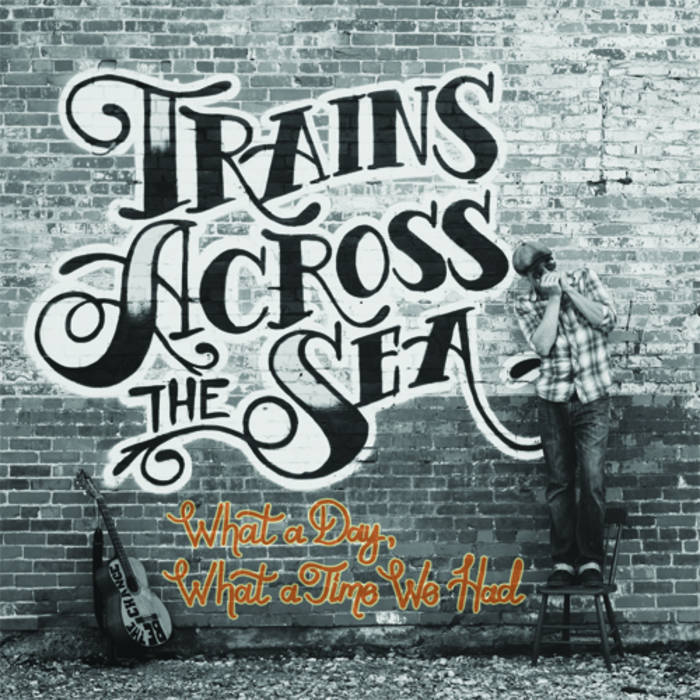 TRAINS ACROSS THE SEA - WHAT A DAY, WHAT A TIME WE HAD

All songs by Andy Gallagher.

Recorded and mixed by Eric Cronstein at The Tone Shoppe except THE CAPTAIN and additional recording at home.

but we've heard that jive a thousand times, boy
it's all been done before
it don't seem they're distracted by the baring of your soul
but i hear he's playing shows still belting out those same old notes
that if he sang a song would you sing along
to the gods of rock and roll

a letter came today
and sent you on your way

you said "it's my dream school! this is the one i want to go to
"this is the only way that i can be me
"maybe in a half year you'll like what you see here
"you'll move out and move in with me"

but now that we're older and i've drank myself sober
and i've come to realize there's nobody half as swell as you girl
and so i've made up my mind to stop wasting my time
because if you want her, you've got to go get her

i wrote a letter today
that sent me on my way

we could climb a mountain, if we had a mountain
lose another one to the second city
let's take a ride behind the captain
everybody grab a mate we're gonna sail all the streets of our city

but if you ever need a babysitter
or if he ever needs a father figure
or when he 15 and hates you, honey
and your husband ain't home, he just sends you the money
and you need to be held, you had your chance

so don't think of me

because i can help you get through the night alright
and believe me, darling, i won't mind if you get that look in your eye

i can help you and ease your pain
but when i call you, you better answer and call me by my name

so say just what you want to say to me
don't leave me hanging around until world war three
cause i know, pretty darling, got a lot on your mind
and if you worry when you're leaving you ain't doing it right

but if you're gonna do it do it tonight
cause this other girl is giving me eyes
if you gonna leave me girl, please do it by the end of the night

break out the fancy clothes and drive slow to the funeral home
let the mother know she's not alone
tell her you always saw him smiling and he always kept you laughing
she did a good job, she did the best that she could do

and the sun's gonna hide behind the rain today

sometimes the sun hides behind the rain

he's a little bit nicer than the last one he don't bruise you half as bad
sometimes when he gets sober he can almost make you laugh
anyway, you just watch movies and the sex it ain't so bad
so he'll be your january friend
he'll be your best friend in the world
until the next best friend

10. LOVE IS SOMETHING THAT YOU DO

love is something that you do

Trains Across the Sea is the musical output of Andy Gallagher.

He also co-wrote the trucker musical "SEMI FAME: The Truck Route to Broadway."

Trains Across the Sea recommends:

Bandcamp Daily  your guide to the world of Bandcamp